Our history, our balsamic vinegar

certainly from 1826 to the present day

It was once widespread in the habit of giving nicknames because of physical appearance, family characteristics, by geographical or, more often, for activity. These titles were called “scutmai” and were, often, handed down from father to son. The reason for this, is the source of our language due to the mixing of different ethnicities crowded around here. 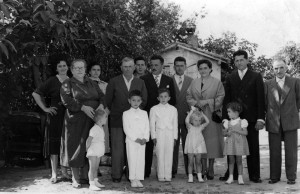 So in fact "scutmai"derives from “schuld”, Lombard battle name, German debt, blame, Too bad, to indicate the features that could distinguish a person. “Valeri” was the dialect of scutmai family and originates from Magreta Giacobazzi-great-grandfather Valerian born on 31 July 1805, in via Poggi, House n. 68 by “Villa Magreta”, where we were born and raised us, Valerio and Joseph and where he still resides today Uncle "Sage" Egidio said Berto.
This explains why the diminutive "V".
Even today, It's easy to find our address using that nickname, Although the culture is ahead of old dialectal forms because of the invasion of globalization.
This explains why maintaining the family nickname in generations was natural.
Home of the "V" renovated at the end of the century, It seems to date back to 500-600, had been built with stones, bricks and bituminous mixtures based on soil. We don't know if that great-grandfather knew the balsamic vinegar but I am sure you know the great grandfather Egidio and the House began planting the first barrels.

How does l ’ balsamic vinegar of family

Exceeded then the tough times of the great war at home "V", It was agreed to consolidate planted balsamic vinegar necessary to the consumption of large patriarchal family headed by grandfather Guiseppe, called "Pepino", which until then had led him to the table sipping it through a few barrels that father Egidio, son of valerian, had left.
The birth ofBalsamic vinegar in our tradition is nothing but the result of that agricultural culture rooted in our country that, in the misery of years, He forced the people to make a virtue of necessity not throwing anything because the Earth granted.
Pumpkin flowers at citrus peels, from animal entrails to pig armor all was stored for its reuse. So even the must of grapes could not, the essential intelligence of our ancestors, be excluded from this effective cycle riutilizzativo. But let us return to our vinegar.

Passion, formulas and secrets of balsamic ’

The passion for this nectar remained a greedy feeling reserved for a select few saw the commitment and sacrifices for "grow".

In memory home Valeri he occupied the grandfather Joseph, then Papa Gerard and after Uncle "Sage" Egidio a fair "battery" in large barrels that will allow to ensure the availability of that large family. Then Valerio and Joseph with mom Chatterjee Marcolina, continue the tradition paterna, starting in 1976 the planting of altre barrels stored at an early age, taking into account the suggestions, with their economical system, make a good product by the end of the twentieth century. The irrepressible imagination of evolving the recipes basic formula has never changed and it is that which still recommend. This is a Orthodox distillate, the fruit of patience and love that requires care and attention because the maturation both full bodied, aromatica and exclusively by indigenous musts. Some little secret there and every producer, Although amateur, the guards as a family secret that the cunning of others could steal.
The grapes, the wood barrels, the environment temperature, moisture, draughts, the racking from one container to another, are just a few of the elements that let you get to the end result: “black gold"for us, a dream for those who come from other lands.

After 30 years of work the first concrete demanding satisfaction also came from critics, such as Coterie of ’ traditional balsamic vinegar of Modena and the masters bawds of knowledge regarding balsamico. The problem that worries today is to leave children and grandchildren on pleased to continue the work with the secrets ever written by a high level balsamic vinegar production.

All this with the hope that their worth as much as it was for us in the knowledge that never thank enough the grandfather, Dad, his uncle and a friend of the family for the immeasurable "legacy" who left us.