Interview with Maurizio Fini, President and Grand Master of the Balsamic Vinegar Consortia

HomeNews from the pressInterview with Maurizio Fini, President and Grand Master of the Balsamic Vinegar Consortia 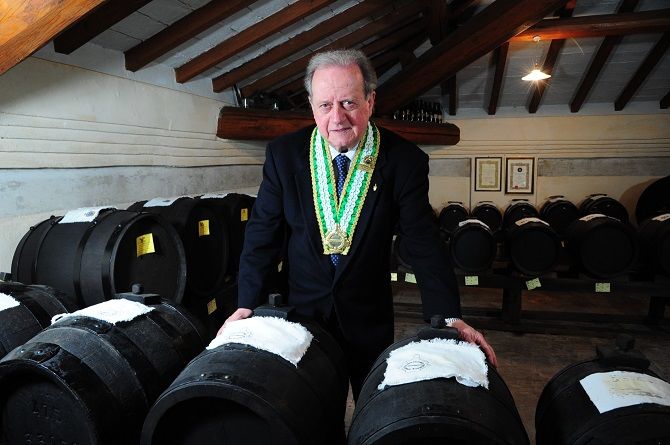 We report part of the interview carried out by Giuseppe Marasti for Italian Economy, where you can find many ideas to deepen your knowledge of Balsamic vinegar.

Maurizio Fini, President and Grand Master of Consortia, tellsItaliana.it economy like this product, once given in dowry to noblewomen who married, has become a world-renowned product. And how are you repairing... damage of history

Maurizio Fini, 70 years, former photography entrepreneur, is in his second term as president and grand master of the Traditional Balsamic Vinegar Consortia, Spilamberto in Modena. His grandfather, mutilated by the First World War, one day he asked him to accompany him to his brother to pick up a wine demiresan Trebbiano. Once bottled, the bottles were placed in an unsuitable place, too exposed to the sun and the wine became acety.
This was his first encounter with vinegar which he would later develop and intensify over the years. In 1975 he would join as a partner in the Spilamberto Consortia and for a decade he has held important roles within this association that counts over 800 Members. Innovation at the service of tradition have always been the watchword of the Grand Master who will remain at the helm of the Consortia until the 2021 and that we interviewed.

Grandmaster Fini, in practice what are his assignments?
They're of so many types, In addition to the usual administrative tasks, organizational and logistics, think, for example, of the organization of the annual Palio, i.e. the evaluation of more than 1.500 vinegars from family farms, which represent only the tip of the iceberg of Modena acetaias. All samples must be, once anonymized, be subjected to analysis, performed by our in-house lab, to measure their density in Brix grades and volumetric acidity. The same samples will later be tasted by the Masters tasters through a sensory tasting. The best ranked, about the 50%, will enter the quarter-finals, where they will emerge 72 semi-finalists. A further taste will allow us to identify 12 finalists who will compete for the title of best balsamic vinegar of the year, receiving in an event inside the St. John's Fair in Spilamberto honors and awards. To the tastings, about 14.000, Participate 300 members who take turns for more than 30 Evenings, Collecting 3,500 total attendances.
But the most important assignment I think is, as well as the most onerous, that of the guardian of the centuries-old tradition that balsamic vinegar, as a cultural expression of a territory, Deserves. In fact, I am committed to preserving and spreading the tradition of "doing" vinegar, in a completely natural way, continuing to maintain a route unequivocally already defined by our ancestors. Just think that the traditional Balsamic is composed only of a single ingredient: cooked grape must.
There is also a lack of training. In fact, you become a Master tasters only after attending a basic course, and then continue for a decade to repeated workouts to educate smell and taste to recognize scents and flavors that are created inside the batteries thanks to the enzyme transformations that last minimum 12 years, but they go as far as 25 years. And only then can we define our vinegar as an old extra.

How to become a Grand Master?
Through a three-year vote, members express, with their vote, the liking of candidates who have put their time at the service of the Consortia, their passion (we're all strictly volunteers) and their skills. Once elected, the Councillors elect the Grand Master.

The poet Virgil in the first book of the Georgiche describes a scene set in a peasant house of his Mantua: "It's autumn... the woman sits at the frame, weape and sings" or – writes the poet – "Cook the must, the sweet juice, about the fire, carefully removing the foam from the seething liquid on the pair with a fragment.. Maybe it was already a vinegar with balsamic characteristics?
Certainly no, or rather, Not yet. The practice of cooking must in the areas of the Padana plain is definitely millennial. The native grapes of that time, Vitis Labrusca and Fortana, produced a low-grade wine, poorly serbable, so the must was particularly suitable for cooking (Conservation). And the increase in the sugar content that was obtained served to "cut" the wine of the Romans that acetyficated naturally for the action of the vinegars, thus being undrinkable. And there were no containers at that time (Bottles) able to prevent the oxidation of wine. Patrician families used honey (rare and expensive) the rest of the population "sweetened" the wine that became vinegar with cooked must.

When and where exactly the real balsamic vinegar of Modena is born, whose acetaias in the old days were given in dowry to noblewomen who were married?
From ancient testimonies on the use of cooked must in ancient Rome, we detect in De Coquinaria, by Apicio, famous chef of the time, the description of the favorable mutations of the cooked must when it was forgotten, left in barrels for one or more years "soletascetere" and was better. As with so many other products, randomness played an important role. Instrumental, in particular, was the preservation of the uses and their transmission to subsequent generations.

The Extensibles in the 1598 moved from Ferrara to Modena, brought all their vinegars with them, but there they discovered another one, unknown to most, product at the family level and in confined environments it is not known how long. This could already be considered balsamic vinegar?
Of course, yes, even though it wasn't yet called that. The Extensives (which, contrary to Ferrara, after more than 300 years of reign, Modena has not dedicated a single street...) they fall in love with that i accept made from a must alone, purged and reduced according to practice, completely different, with a harmony of unparalleled scents and flavors. In the attic of the west tower, said of the Meadow, favored the abode of an acetaia fed with only cooked must, in that tower matured over time an excellent vinegar that was named first vinegar of the Duke and only in the 1747 Balsamic vinegar was called as can be seen from the inventory of the Ducal cellars where three types of vinegars are recorded: Common, semibalsamic and fine Balsamic.
The batteries of the Ducal Acetaia were plundered by Napoleon who monetized them, selling them at auction. The vinegar thus came out of the noble golden to enter the bourgeoisie of that time, remaining within the framework of Modena families. To this day the ducal acetaia has been orphaned, battery-free. But I had the chance, thanks to the sensitivity of the military leadership (Today The Ducal Palace is home to the Military Academy) to bring back to the exact same place some batteries that as Consorteria we are honored to follow, loving and cared for: another task of the Grand Master: repair the damage of history!

In addition to traditional balsamic vinegar, how many other types of Balsamic Vinegar of Modena exist?
In addition to traditional balsamic vinegar Dop, The province of Modena produces balsamic vinegar from Modena Igp. The difference is that the first, as well as taking care of the Dop, it is obtained only and exclusively by the slow maturation and aging of cooked must of native grapes of the province. And you need at least 12 years to be called traditional balsamic vinegar, whereas after that 25 years of battery stay can be called Extraold. All regulation from a strict discipline dating back to the 1860 by lawyer Aggazzotti.
The second is obtained from the mixing of wine vinegar, concentrated must and caramel, predetermined by the disciplinary, and to be able to use the Igp brand, expects at least one processing, bottling as a rule, should take place in the province of Modena, where of course we find all the industrial acetyphics. The ripening time is expected in three months, while in order to be able to use the name of Aged must spend three years.
Additional vinegars classified as "condiments" are obtained using, more disparate raw materials and pseudo-aging, normally of very low acidity (that's why they can't be classified as vinegars) captivating for their sweetness.
A further offer (Aberrant) on the market, is given by the so-called "icings", synthetic industrial products, where we can read the label: "IGP balsamic vinegar" product, which is contained to the extent, if I'm not wrong, of 5%.

How to get traditional balsamic vinegar? How many years must it take for this to be considered?
You get as we've seen from the maturation and aging of cooked must. The correct process therefore begins with slow open-air cooking (pair without lid) raw must made from the sweet squeezing of local grapes such as Lambruschi, The Trebbiano or Trebbianina, the Ancellotta, Stool and all the vines recognized with the Doc controlled Designation of Origin. Cooking at temperatures below 90 degrees should not be, as per tradition, protracted for more than 10 Maximum 12 hours. This will result in a drop of about 30% exactly as at the time of the Romans who called him Defrutum and placed him in the defrutarian chamber. The must thus obtained thanks to the action of the yeasts will turn the sugars into alcohol and then the action of the acetobacteria will transform, through acetic bioxidation, alcohol must in acetic acid.
We will therefore be ready to enter into our battery, not before having purified every barrel from excess tannins and Gallic acid contained in the woods, acety must.
The battery, made from traditional woods such as mulberry, The Wild Cherry, Chestnut, The Oak, the Juniper will be stored in the attic where it will undergo the thermal excursion of our torrid summers and the harsh cold of winter. During the summer the contents of the barrels will slowly evaporate, It will therefore be necessary to raise, and restore the "calato" every year of the "tail" barrel the smallest, drawing from barrel number two and so on, in the big barrel of head will be entered the acetified must fruit of the last harvest. 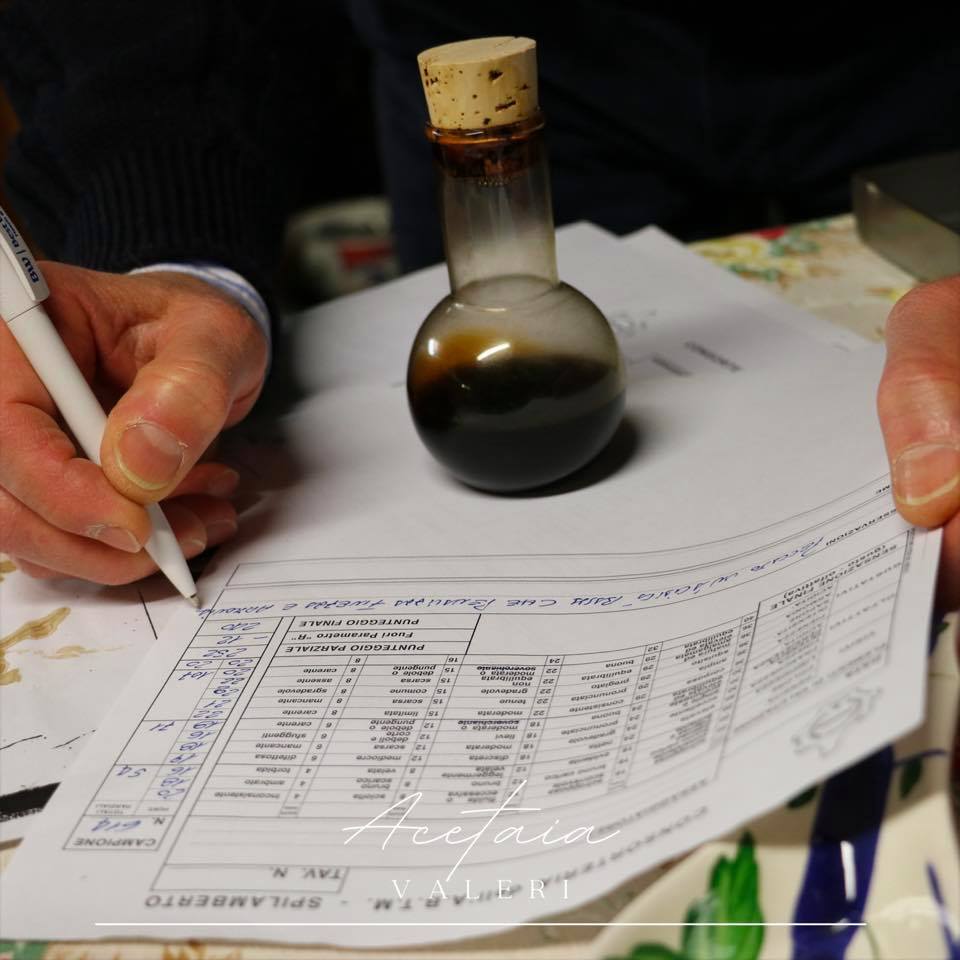 And’ born the district of balsamic vinegar of Modena PGI

And’ the fifth Italian agri-food product DOP PGI The new Balsamic Vinegar of Modena PGI Food District dedicated to promotion, the development and protection of the product and the enhancement of the supply chain and the culture and tradition of the... 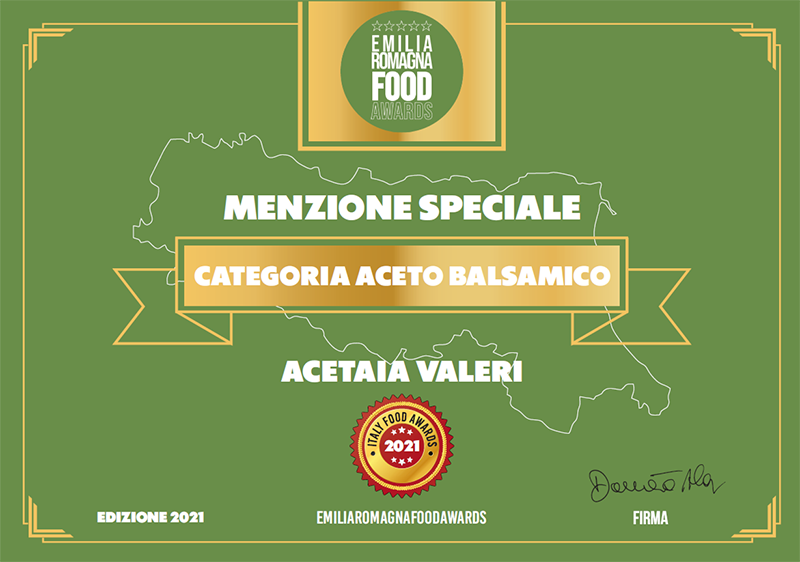 Our balsamic vinegar among the agri-food excellences of Emilia Romagna Aceto Balsamico Acetaia Valerisi wins the special mention at the Emilia Romagna Food Awards 2021, the first Oscar dedicated to agri-food producers. This is an important recognition sponsored by the Region..

Events and appointments, News from the press 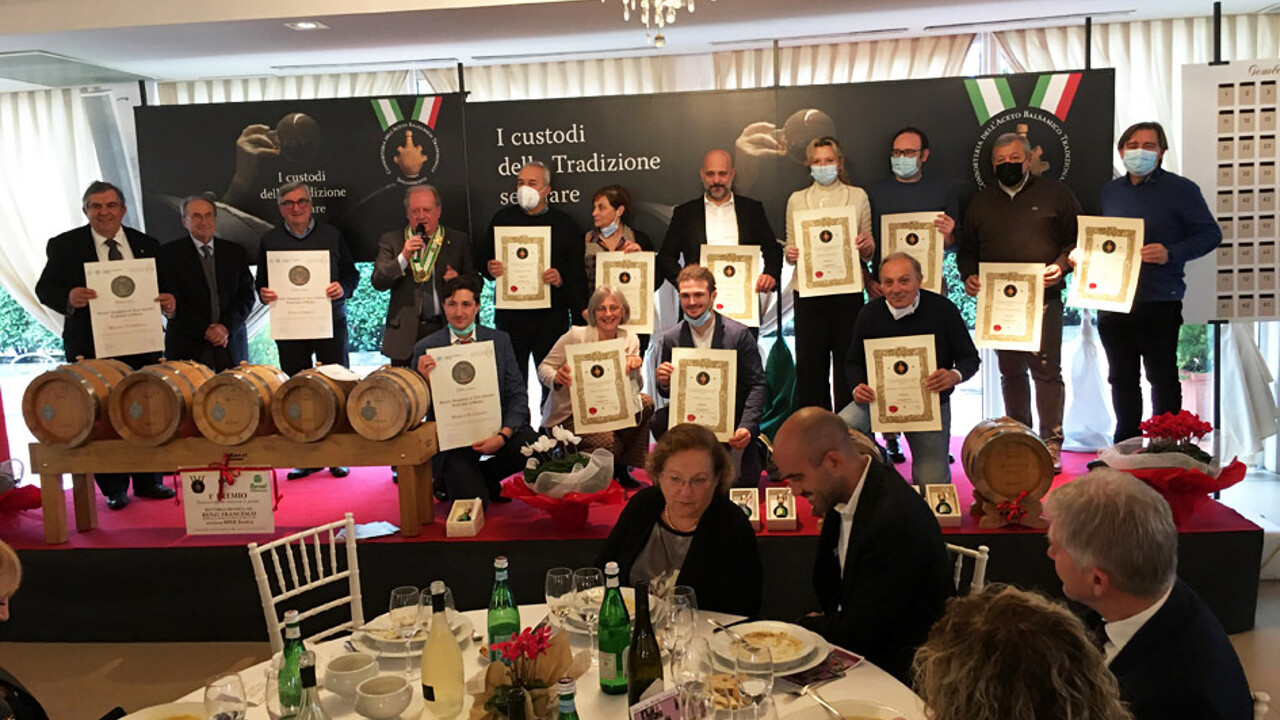 The annual lunch of the Consorteria dell'Aceto Balsamico di Spilamberto was an important opportunity to reaffirm the most ambitious project: “We would like to see balsamic vinegar become a UNESCO World Heritage Site and be recognized as an intangible cultural asset of humanity. The application has been submitted, now the collaboration of the institutions is fundamental", underlined the Grand Master Maurizio..

This site uses Akismet to reduce spam. Find out how your data are processed.